On August 17, 2017 the Advanced LIGO and Virgo interferometers detected gravitational waves from the inspiral and merger of a binary neutron star system. Twelve hours later, a visible counterpart was identified by astronomers using a wide range of telescopes, including our team using the Dark Energy Camera. The discovery of this event (dubbed GW170817) marks the first time scientists have detected gravitational waves from this type of system and the first time electromagnetic radiation has been spatially and temporally associated with a gravitational wave event.

Gravitational waves occur when a mass experiences an asymmetric acceleration. LIGO and Virgo use pairs of lasers to detect a change of length between two perpendicular tubes as a gravitational wave passes through. Over the length of its 4km arms, LIGO can detect a change in length equal to about one ten-thousandth the radius of an atomic nucleus! This is the equivalent of measuring the distance from Earth to the nearest star to the accuracy of a human hair, making LIGO the most precise ruler ever built.

Discovery image of the optical counterpart to GW170817.
Credit: LIGO

However, LIGO and Virgo alone cannot determine exactly from where a gravitational wave originated. In order to maximize the science gains from gravitational wave detections, we need to identify an associated electromagnetic counterpart. By finding a counterpart, we can determine a precise localization and distance to the source, find the host galaxy, and perform much more detailed studies of the source and its environment. We do not expect such an electromagnetic counterpart from black holes, but we do in the case when two neutron stars collide.

Binary neutron stars are formed from a massive stellar binary. Initially two stars with masses greater than about eight times the mass of the Sun are formed in close proximity, orbiting their mutual center of mass. In only a few million years, both stars will run out of fuel and explode as supernovae. If the system is not disrupted by these supernovae, a binary neutron star will be left. Just like the black hole binaries already detected by LIGO, neutron star binaries will inspiral as gravitational waves remove energy from their orbits, until eventually they merge.

It is thought that binary neutron star mergers could be the primary site for the production of heavy elements such as gold. To make the majority of elements heavier than iron, neutrons must be added to atomic nuclei faster than the products can decay radioactively. This rapid neutron capture, or r-process, nucleosynthesis, requires dense, neutron-rich material. Such an environment is expected in the ejecta produced by the collision of two neutron stars.

The mergers of neutron star binaries are expected to produce electromagnetic radiation across the full spectrum, from radio to gamma-rays. One of the most energetic possibilities is the short gamma-ray burst. These occur when material accretes onto the remnant black hole formed in the merger, driving a powerful relativistic outflow of material. However, this emission is strongly beamed and may not always be visible to observers, depending on their viewing angle. A weak gamma-ray burst was found in conjunction with GW170817 by the Fermi and INTEGRAL satellites, and we determined with our X-ray and radio observations that the beam was pointed away from us. 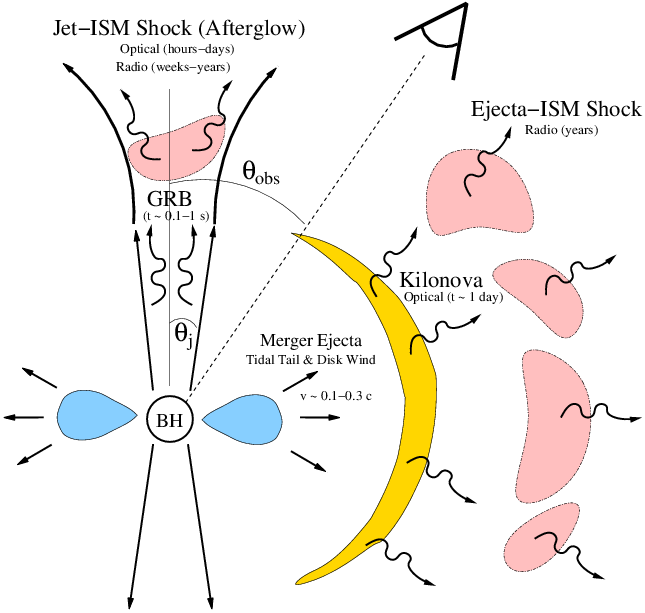 A more promising counterpart is the so-called “kilonova.” This transient is similar to a faint, short-lived supernova, but is powered by the radioactive decay of heavy r-process elements. There are many models that attempt to predict the observed behavior of a kilonova. While they all share some basic characteristics, an uncertain aspect of kilonovae is the effect of the heavy r-process elements (especially lanthanides) on the light curve. Specifically, the opacity of the ejecta may be significantly higher than what is expected for supernovae, and this will affect the observable properties (e.g., peak luminosity, duration, and color). There are even models that predict kilonovae might have separate “blue” (lanthanide-poor) and “red” (lanthanide-rich) components depending on where these heavy elements are formed in the merger ejecta. Remarkably, our optical and infrared data for GW170817 show both predicted components.

Here we present a sequence of papers with our extensive set of observations, spanning nine orders of magnitude in energy. Our analysis covers the discovery of the first kilonova associated with a gravitational wave event, the properties of both the relativistic gamma-ray burst and the r-process kilonova, and the host galaxy environment where the merger occurred. These observations demonstrate the immense power of multi-messenger and multi-wavelength astronomy.

You can read more about our work by clicking on the images below, or by downloading all of our papers directly.